Pharmaceutical market of Uzbekistan appears as one of the leading and fastest growing among the CIS countries. The investment amounted to US $ 76.53 million USD over the past year, including 34.83 million USD of foreign direct investments. The volume of Uzbek pharmaceutical market has reached the level of $ 1 billion, 80% of which are imported drugs. At the same time annual growth of the market volume is 25-30% in average. The market is dominated by imported products coming mainly from Germany, France, India, the USA, Ukraine, Russia and other countries (according to “Uzfarmsanoat” SJC)
There is noted a tendency to stimulate growth of productive capacity and attract foreign investment for a long time in the state of development policy in pharmaceutical sector. In particular, in accordance with the Presidential Decree УП-4434 of 04.10.2012 “On additional measures on stimulation of attraction of direct foreign investments” of the economy sectors’ enterprises, including field of drugs production, attraction of direct private foreign investments are exempt from payment of income taxes on the property for improvement and development of social infrastructure, of single tax payment for micro and small enterprises, of compulsory contributions to the Republican Road Fund for 3-7 years, depending on the volume of investments. In addition, foreign companies engaged in investment activities in the country are exempt from customs duties on imported equipment and raw materials intended for production of drugs and medical devices.
The strategy of development of domestic pharmaceutical industry includes the following tasks:
– Providing of national drug safety, guaranteed production of a number of drugs, starting from substance and ending with finished product
– Increasing of the share of high-quality domestic drugs with market coverage of at least 45-50%
– Bringing of innovative domestic products to the market
Currently there are more than 130 licensed companies producing drugs and medical products in the country. “Jurabek Laboratories”, “Nika Pharm”, and “Nobel Pharmsanoat” can be highlighted among the leaders in the market by the end of 2014. The volume of production of enterprises of pharmaceutical industry amounted to 420.5 billion soums (growth rate – 120,3%) in 2013. Medical product are produced in the amount of 318.2 billion soums (growth rate – 109,5%), health care products – of 58.1 billion soums (growth rate – 124,7%), auxiliary materials – of 37.3 billion soums (growth rate – 496.0%), and other products – of 6.9 billion soums (growth rate – 103,6%). In real terms, output has reached 688 million units (growth rate – 134,7%). 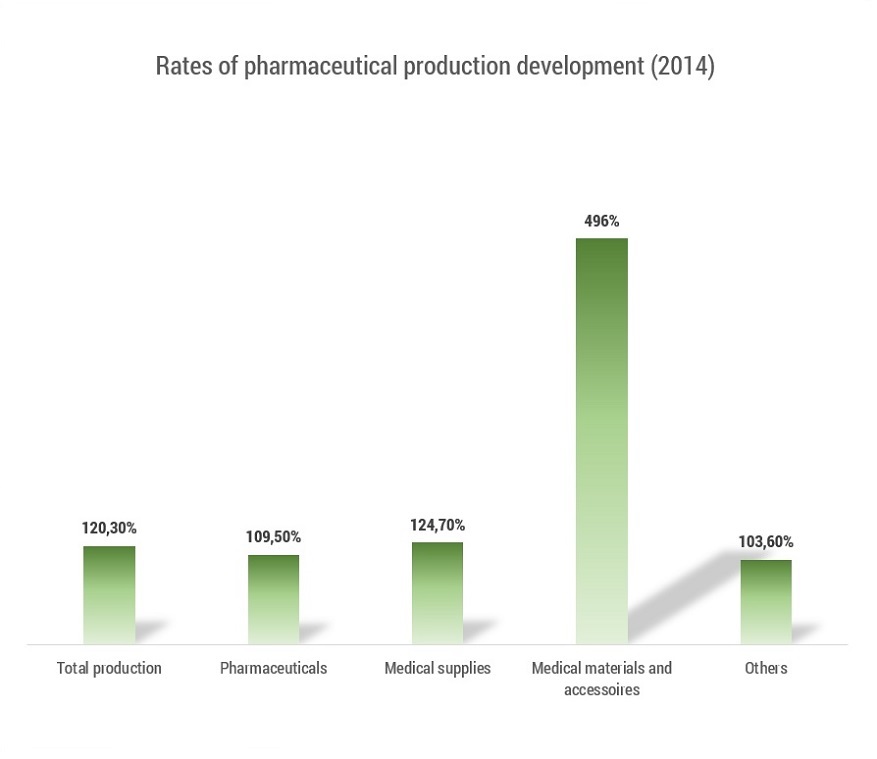 Analysis of Uzbekistan pharmaceutical market structure shows, that 30% are medicaments are manufactured in tablet form and 28% – in vials and ampoules, and 17% – as dried powders. At present, the main products of pharmaceutical enterprises are injections, infusions, tablets, capsules, ointments, medical devices, pharmaceuticals, utensils etc. At the same time “Novopharma Plus”, “Nika Pharm”, “DentaFill Plus”, “Nobel Pharmsanoat” and “Remedy group” have made significant contribution to development and introduction of new products over the past 2 years. It should be noted also that 22 pharmaceutical companies, members of the “Uzfarmsanoat” SJC have international certificate of quality ISO: “Novopharma Plus”, “Nika Pharm”, “Radiks”, “Jurabek Laboratories”, “DentaFill Plus”, “Zamona Rano”, “NASA”, “Remedy”, “Remedy group”, “Uzgermed Pharm”, “Samsun-Tashkent-Pharm”, “Gufik-Avicenna”, “Asia Trade”, “Reka-MedFarm”, “SAMO”, “Elastikum”, “Merrymed Farm”, “Nobel Pharmsanoat”, “Galenika”, “Makrofarm-Optima”, “Immunomed”, and “Pharmed”. Uzbek manufacturers of medicines successfully cooperate with leading pharmaceutical companies in Germany, Russia, Turkey, India, China, South Korea, Poland, Bulgaria, the Czech Republic, and other countries. Investment attractiveness of pharmaceutical sector of the country provides sufficient market with a simplified mechanism for export of produced products, as well as opportunity to enter the markets of the neighboring countries. 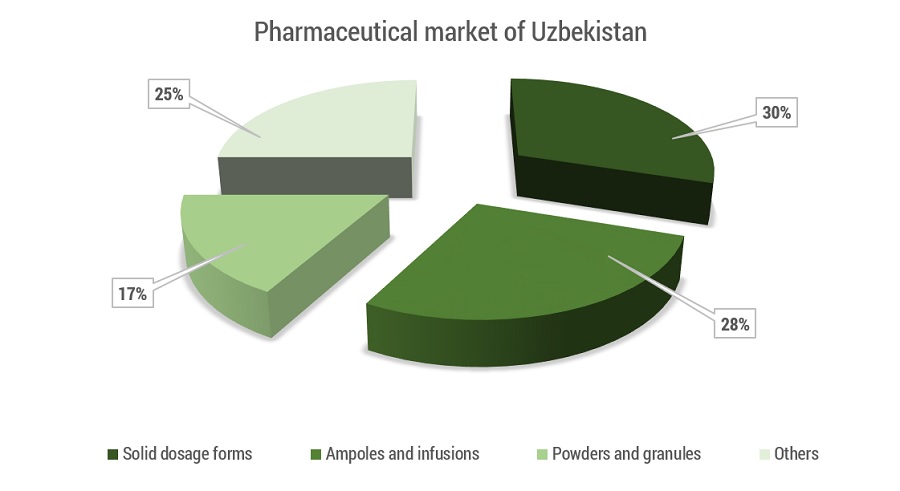 Despite the achieved high rates of growth, further development of the national pharmaceutical industry is considered necessary. At the same time one of the priority tasks includes development of drugs based on own development and local raw materials. We should pay particular attention to the fact that Uzbekistan has a rich flora, including 138 families, 1023 genuses and 4500 species of plants, including about 1,150 medicinal plants, which may allow to produce original drugs and dietary supplements on the basis of local raw materials in the future and to provide the population with quality and affordable drugs. 14 investment projects are developed and approved in 2014 for the purpose of production of medicines and medical products in accordance with the Decree of the President of the Republic of Uzbekistan dated 07.24.2008 No. ПП-927 “On measures to improve the process of attraction and development of foreign investment and loans”. The total investment planned for implementation for 2014 from all financial sources is $ 155,700,000.