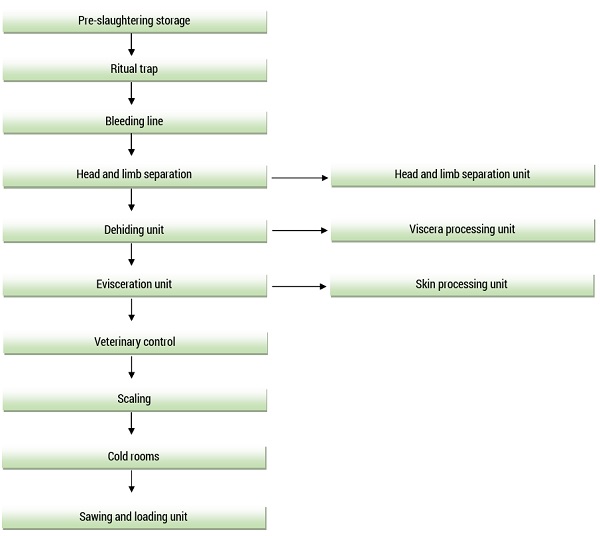 1. Livestock is transported to the territory of the enterprise and placed in pre-slaughtering storage.

2. Cattle by one animal being pushed to the line in the installation of ritual trap, where the position of the body is fixed, made a 180 degree turn and major arteries in the neck are incised for bleeding.

3. Animal is unloaded from the box on the platform, superimposed chain is put on the hind legs and the animal is risen to the bleeding line. Before bleeding a ligature must be applied in the esophagus of a cattle. For complete bleeding large blood vessels in the neck area are cut, and the blood flows into the concrete tray for 8-10 minutes.

4. After bleeding, three of the four limbs are separated and shank clearing and skinning is started with difficult cultivated areas (tail, cut along the line of the abdomen, partial skinning shot from the abdomen and chest, hip, shoulder blades)

5. Then after having cut off his ears at the base, the skin is removed from the head, same as the head itself. The separated head is hung forward for trachea horns on the conveyor the inspection goals. On both sides of the tongue muscle tissue is incised, the tongue is separated and everted out for veterinary inspection.

6. After completed shank clearing begin the mechanical skin dehiding is started on the dehiding machine. Therefore, the skin of cattle should be removed in two ways: when separating the skins to the last dorsal vertebra angle of about 70 with the speed of 0,06-0,08 m/s, then the tangent to the surface of the carcass at a speed of 0.12-0.16 m/s.

7. Process of removing the internal organs from the carcass is called evisceration. Internal organs are removed no later than 45 minutes after bleeding is done. Initially, the false path is stretched hind limbs carcasses of cattle, pubic symphysis is sawn, the abdominal muscles on the white line is cut, anus is ringed and bladder got tied up. At the beginning gland (fatty tissue covering the stomach), is removed of the carcass, then the gastro-intestinal tract, spleen, pancreas and esophagus leaver come out. Pluck consists of the trachea, left and right lung, heart and liver. After ablation of the pluck the adrenal glands are removed and the film is cut along the spine in the kidney area to separate them in order to prevent damage to the latter when cutting carcasses. On the evisceration conveyor viscera is exposed to veterinary inspection. Tripe, grid, rennet and book are degreased, released from content, washed and sent to offal floor, intestines – are sent to the intestinal shop. Viscera must be removed very carefully, without damaging the gastrointestinal tract, liver and the inner surface of the carcass. These by-products are processed at the place of receipt or offal floor.

8. After removing the viscera carcasses are cut along the spine, slightly departing from the upper line of the spinous processes, so as not to damage the spinal cord.

9. When dry cleaning the spinal cord is recovered, kidneys, tail, the remnants of the diaphragm, the internal fat, scarred areas of carcasses (bruisings) and dirt are removed.

10. Wet cleaning (washing carcasses with water at a temperature of 35-40 C), is made, if the dirt can not be removed during dry cleaning.

11. Veterinary examination of cattle is carried out in the following points: 1 – head and neck lymph nodes; 2 – internal organs; 3 – survey muscles to measles; 4 – the final examination. Only when there were this evidence (after an inspection of the head, internal organs and lymph nodes), as well as the presence on the carcass of traumatic injuries and changes specific to pleurisy, peritonitis, bruising, abscess, edema, etc. shall the muscles be cut and shall the lymph nodes be opened At the non-suspicious touch the extra cuts are not allowed, since they reduce its marketability and suitability for long-term storage. Carcasses with bruises traumatic nature are not subjected to long-term storage. Poor exsanguinated carcass are usually subjected to bacteriological examination.

12. As the veterinary examination is completed, half-carcasses are weighed and sent to the refrigerator. Commodity evaluation of meat before releasing it from the slaughterhouse is performed by the butchering controller on the basis of GOST 779-87 “Meat – beef carcase sides and quarters”. It is not allowed in the sales, and used for industrial processing for food purposes as follows: gaunt meats; meat of non-castrated bulls; meat with sweeps and breakdowns fat exceeding 15% of the surface of the half-carcasses or quarters, as well as with the wrong division of the spine (with the remains of entire vertebral body). Each half-carcasses or quarters are branded depending on the category of nutritional status and direction of use according to the veterinary meat branding instructions. Beef, shipped for sale is branded with purple, beef shipped for the production of sausages, canned goods, intermediate goods and other products is branded with red.
The processing of small cattle is composed of the same production operations, and processing of cattle, but it has some features. For bleeding puncture is made through the neck, cutting the carotid artery and jugular vein. The total duration of bleeding is about 5-6 minutes. During dehiding process compressed air blowing is carried out under the pressure of 0.4-0.5 MPa in the fetlock joint and the root of the tail. The total rimming-over area carcasses of sheep and goats is 30-40%. Skin from the carcass can be removed mechanically from the neck to the tail or from the tail to the neck. Mutton and goat meat is produced in the form of carcasses without ripping. The tail (except for the fat-tailed sheep) and the kidneys with the adjacent fat are usually left in the carcass. No viscera residues, blood clots, fringes, contaminations are permitted on the carcasses. The surface of the carcasses must not be damaged. Presence of sweeps and disruption of subcutaneous fat shall consist no more than 10% of the total surface area of the carcasses.